Venice: a floating city in the Adriatic 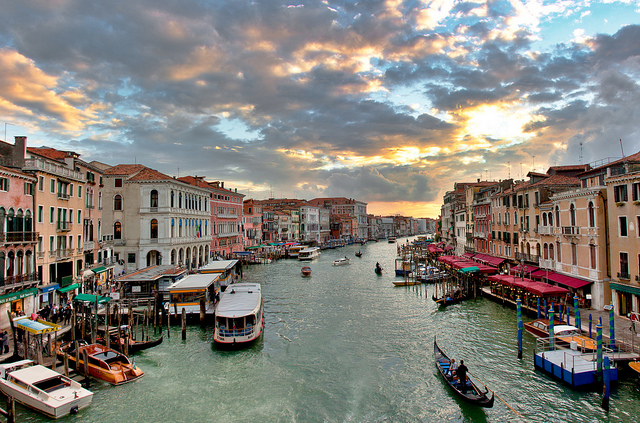 Located in northeastern Italy, Venice is one of the world’s most fascinating cities.  One of its major claims to fame is the fact that the city is not located on the Italian mainland at all.  Instead, it is situated on more than a hundred different islands in a shallow lagoon off the Adriatic Sea.  Over four hundred bridges and nearly 200 canals connect the islands into a community, with the canals serving as the main transportation routes in the oldest parts of town.

Throughout its long history, Venice has been known as the ‘Queen of the Adriatic,’ the ‘Floating City,’ and the ‘City of Bridges’.  Indeed, for many centuries Venice could only be reached by water.  Today’s tourists, however, can travel by train directly into the city or even drive across the lagoon by means of the Ponte della Libertà causeway.

Gondola rides along the Grand Canal

The main method of transportation along the major canals in Venice is the vaporetti, or waterbus, but most tourists that travel to Venice want to take at least one ride in an authentic gondola.  Among Venetians, these narrow, hand-propelled boats with Persian rugs and velvet-covered seating are reserved for special occasions.  For tourists, they provide a leisurely way to enjoy the length of the Grand Canal, a major waterway that bisects the city.

A tour along the Grand Canal allows visitors to Venice to enjoy a close-up view of the various architectural styles that flourished here from the 13th to the 18th centuries.  Many of the more than 150 buildings that line the canal are palaces constructed by the richest residents of the city during various portions of its history.  Since these impressive palaces rise directly from the water without any sort of pedestrian walkway along their front facades, the only way to appreciate their magnificence is to travel past them on the canal.

The most famous church in Venice, Saint Mark’s Basilica is more than 1,000 years old and is located adjacent to the Doge’s Palace.  Technically a cathedral, the Basilica follows the principles of Byzantine architecture and features opulent mosaics gleaming with gilt as well as domes and spires reminiscent of those more usually found in Turkey or Russia.  The sheer luxury of the building has caused it to be dubbed the Church of Gold ever since the 11th century.

The main public square in the city, Piazza San Marco, borders the Basilica on one end and is dominated by the tall bell tower of the church.  Known as the Campanile, this tower rises to more than 300 feet above the plaza and it is internationally recognised as a symbol of Venice.

Because cars are not permitted in the old sections of Venice, the Piazza San Marco holds the distinction of being the only large public square in Europe where human voices dominate the aural landscape.

The Carnival of Venice

One of the best times to see the city is during the Carnival of Venice, which begins each year about two months prior to Easter and runs through to Shrove Tuesday.  The carnival is characterised by parties where participants wear traditional Venetian masks.

Even when the Carnival is not in session, Venice attracts more than 50,000 visitors each day, marking it as one of Europe’s most desirable destinations.