Top 10 most dangerous tourist attractions in the world 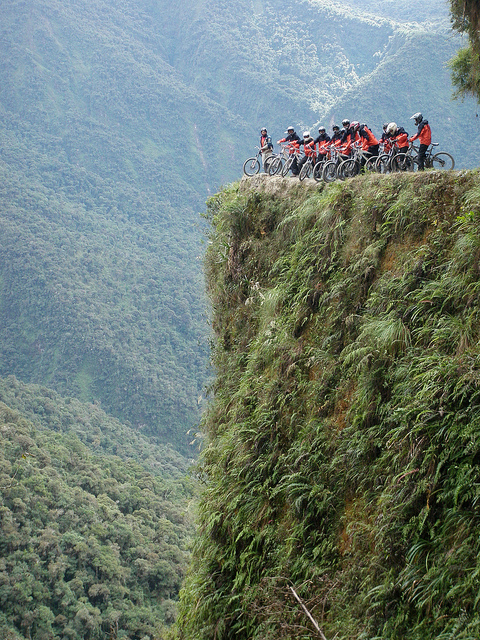 Some students on a gap year have nothing more hazardous in mind than learning an indigenous language so they can be more effective in a humanitarian pursuit whilst abroad.  Others, though, know that after their time of service has ended, they will want to unwind with an activity or two that will make their adrenaline surge out of control.  Nearly every continent offers some form of heart-stopping thrill; here are the world’s ten most dangerous tourist attractions of all.

1.  Stroll along the EdgeWalk at Toronto’s CN Tower

For a modest fee, tourists in Canada can take an outdoor walk that is more than 350 metres in the air.  There is no handrail – indeed, nothing to keep you from plunging into the city below except a safety harness attaching you to the tower itself. High winds sweep past the building so it can be a bit unnerving to say the least.

Many of the world’s dangerous attractions are so obviously hazardous that they can induce a panic attack.  Chernobyl is different – though the danger is no less real.  The site of the 1986 Soviet nuclear disaster is located in Ukraine.  Radiation is still detectable, and while officials do stress that the site is safe to visit for short periods, they still impose rules to stop any soil leaving with tourists; visitors are not even allowed to rest their camera tripods on the ground.

3.  Bungee jump over a pool of bubbling lava

Bungee jumping is hazardous enough for some tourists, but those in search of extreme danger will want to take a plunge from a helicopter into Explore the Amazon!.  Jumpers can come within about 200 metres of the lava’s surface, all the while wondering if this will be the one time when the bungee cord snaps.

4.  Drive the “Death Road” in Bolivia

While in South America, adventurous tourists may also want to take a bus or car along the so-called “Death Road” that runs from Coroico to La Paz.  Widely regarded as the most hazardous stretch of highway on earth, the road is only 10 feet wide in some places and fronts a steep cliff with drops of up to 2,000 feet.  Needless to say, there aren’t any guardrails to keep a vehicle from plunging straight down into the canyon below.

Some of the world’s most dangerous tourist attractions are water-based, such as on the northern coast of Australia where tourists actually swim with deadly box jellyfish.  These creatures appear to be elegant and beautiful, but the tendrils are filled with a poison so deadly that the jellyfish is regarded as Australia’s single most dangerous animal.  Box jellyfish tend to congregate near river outlets along the coast.

6.  Try to avoid their jaws

Speaking of water-borne dangers brings up the subject of swimming with sharks, an activity that can be pursued in several popular locations around the world.  One of the most dangerous is New Smyrna Beach off Florida’s Atlantic coastline, where divers may quickly find themselves surrounded by dozens of man-eating monsters.

7.  Jump off the cliffs at Bish Bash Falls

Many tourists have been killed leaping from the cliffs at this relatively low waterfall.  The pools that lie below are much more shallow than they appear.  Even hiking along the top of the falls can be hazardous since the ancient ledges have a tendency to crumble.

8.  Fly down into a volcano crater

Taking a helicopter ride may not sound so very hazardous, but the truth is that 24 people have been killed in helicopter crashes during tours of the active volcanoes in Hawaii.  Pilots fly as close as they dare, and sometimes they miscalculate. Lava can suddenly come spewing up to catch out a pilot that gets too close.

One of the most dangerous mountains in Europe for climbers is Mont Blanc, located on the border between France and Italy.  High winds near the summit reach more than 90 kilometres per hour, buffeting those climbers who have successfully dealt with the freezing temperatures.  In some years numerous individuals have died attempting the ascent.

Tourists who would like to see a tsunami at first-hand should make for Vanuatu, an island in the South Pacific.  Frequent earthquakes here mean that tsunamis of varying sizes occur quite regularly. These are so frequent that warning signs have been posted for tourists.  At the first sign of earth tremors head for high ground and watch the beaches below.  You may see a small tsunami; a sight relatively few people have ever seen.

For those interested in hazardous adventures while on holiday, there is no shortage of destinations that will provide the thrills and chills desired. These ten attractions are just a start. But what a start!