The world’s most dangerous roads 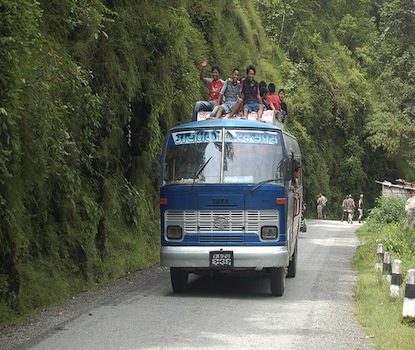 Some people like to go on holiday in order to rest and relax.  Others, however, live for the thrill of danger and love to find new ways in which to risk life and limb.  Few activities can meet this desire quite as well as travel abroad, since foreign nations often offer opportunities for adventure that are entirely lacking in a tourist’s home nation.  One example of this phenomenon is the world’s most dangerous roads – none of which are located in the UK.

So dangerous to traverse that it has been featured in the BBC series World’s Most Dangerous Roads, the Ho Chi Minh Trail is intrinsically different from most of the hazardous roadways on earth.  Other roads are dangerous because of steep terrain and other perils that derive from Mother Nature.  On the Ho Chi Minh Trail, the most potent dangers are entirely manmade.  Snaking through the Southeast Asian nations of Vietnam and Laos, the Ho Chi Minh trail today is still a place where bombs and other ordnance, left over from the Vietnam War, might be set off at any moment.

The Road of Bones

Located in a remote region of Siberia, Russia’s Road of Bones is perilous because of the twin factors of isolation and extraordinarily cold temperatures – sometimes reaching down to minus 50 on the Fahrenheit scale.  Whole sections of the road can become coated with ice during the winter, and as intrepid travellers have found, turning the car engine off just once may mean that it never gets started again.

The Andes region of Peru has more than its share of dangerous roads, but one of the very worst has to be the portion of the 024 that connects Ayacucho to Huancavelica.  With most of this roadway located at more than 4,000 metres of altitude, hazards include fierce winds and sudden snowstorms, not to mention air so thin that altitude sickness can become a real problem for some travellers.  The road itself features blind turns, sheer drops of 1000 metres with no guardrail, and truck drivers who drive at speeds that seem positively insane.

Located in Alaska, the Dalton Highway stretches for more than 400 miles, but not a single inch of it has been paved.  Traveling on gravel is hard on automobiles, so much so that car hire companies will usually not permit customers to take this route through the wilds of the arctic tundra.  Trucks drive it in abundance, however, throwing up thick clouds of mud and grit that reduce visibility to zero.  Meanwhile, there are almost no services such as food or gas along the way.

Connecting Kathmandu with Baglung, a city more than 150 miles away, this road in Nepal is actually the nation’s busiest – but that means very little in terms of safety.  Not only is the road alarmingly narrow in portions, making a head-on collision much more likely, but it also borders steep cliffs.  Since the 1970s, resurfacing has caused locals to drive the road even faster than before, but has done nothing to eliminate frequent landslides.

Driving any of these roads while on holiday will leave a tourist with hair-raising stories that will probably have only one problem – they may not be believed!