Surf’s up all over the world 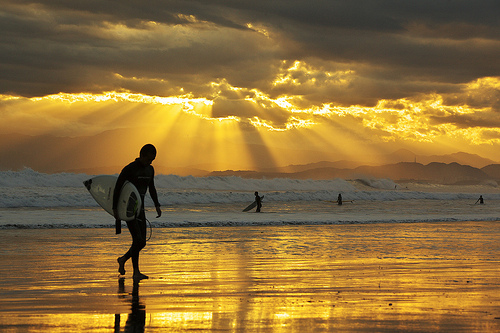 Surfing is one of those activities that can take its aficionados all over the world in their quest to find the best waves. Even better, some of the world’s best surfing hotspots are located in tropical paradises, while others adjoin major cities that offer a wealth of other entertainment for the tourist surfer.

One of the best places in the world for surfing tourism is Waikiki Beach, located near Honolulu on the Hawaiian island of Oahu. Waves at Waikiki tend to be around two feet high during the winter season and three feet high in the summer; Hawaii, of course, has ideal surfing weather even during its cold season.  Novice surfers, in particular, will appreciate the gentle surf at Waikiki, which is where, long ago, the Kings and Princes of Hawaii once spent their own surfing holidays.

Indonesia is another tropical surfing paradise and nowhere are the waves better than along the shores of the Menatawai Islands. Facing the vast expanse of the Indian Ocean, the dozens of islands in this chain offer more than a hundred miles of surf, including more than 45 different surf breaks and 70 tropical reefs. Widely considered Indonesia’s own “surfing paradise,” Menatawai features continuous swells and pristine sandy beaches for rest and relaxation after a thrilling ride toward shore.

World renowned for both the quality of the waves and the safety of its local beaches, Jeffreys Bay, in South Africa, offers surfers the chance to explore hotspots such as Tubes, Super Tubes and Kitchen Window. When not surfing, three local nature reserves are on hand, where holidaymakers can explore and look out for more than 100 different bird species, including penguins.

With hundreds of miles of coastline, California has beaches where the surf culture has been thriving ever since the heady days of the 1950s. Places like Half Moon Bay in the San Francisco Bay area and Redondo Beach, near Los Angeles, allow holidaying surfers to enjoy such world-famous attractions as the Golden Gate Bridge and Disneyland.

The Brazilian state of Santa Catarina has a coastline punctuated by bays, inlets and dozens of islands. Together, these geographic features combine to make waves that reach 12 or even 15 feet in places, such as Imbitube, Florianopolis and Garopaba.

Consisting mainly of right-hand point breaks, Australia’s Gold Coast also offers surfers miles worth of beach breaks, which are ideal at times when the points are busy. Also of interest to tourist surfers is Narrowneck, where an artificial reef has been established.

Closer to Europe and only 80 miles or so off the coast of Africa, tourists looking for surf holidays should take a trip to the Canary Islands. Fuertaventura offers a warm climate and beautiful waves, all year round. However, there are particularly good swells during the spring and autumn.

Many forms of tourism draw visitors to a single region or continent, but not surfing. Excellent surfing spots can be found on practically every continent on earth.