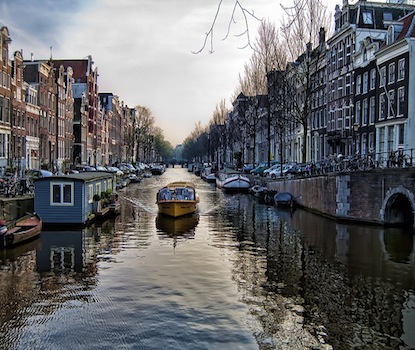 With a climate much like Britain’s, Amsterdam is an ideal destination for UK students interested in short breaks as well as longer holidays.  Famous for both its dikes and its extensive canal system, the capital city of the Netherlands is located in the province of North Holland, which is itself situated on the north-western coast of the nation.  Amsterdam, however, does not directly border the North Sea; instead it fronts a large bay, formerly a lake, that the Dutch simply call the IJ, an archaic word for water.

Although the Dutch government is located in The Hague, Amsterdam serves as the nation’s cultural capital.  More than 4 million tourists visit the city every year, with more than 40% of them coming from other European nations.  An additional 16 million visitors come to Amsterdam each year for stays of less than a full day.  One reason for the huge influx of visitors is the fact that the city is a relatively inexpensive place to visit; lodgings, food and drink, and entertainment are all quite affordable, which makes Amsterdam a good fit for cash-strapped students needing a diversion from their studies.

Tourists in Amsterdam will find that they can visit the city’s most famous museums without having the hassle of finding transport between them.  The area known as the Museumplein (Museum Square) hosts not only the Rijksmuseum, famed for its collection of classical Dutch art including works by Rembrandt, but also the Van Gogh Museum and the Stedelijk Museum, where tourists can view modern art by such luminaries as Mondrian and Malevich.

Amsterdam is an excellent place to visit every day of the year, but many UK students plan their holidays around one of the many festivals and events hosted by the city.  This is not difficult, since in a typical year there are well over a hundred days dedicated to special purposes.  Some of the most famous are Koninginnedag, or the Queen’s Day, celebrated near the end of April; and the Prinsengrachtconcert, which is a classical music event taking place along the Prinsen canal each August.

Also popular with students are the Holland Festival, a June event celebrating opera, theatre, music, modern dance, and the visual arts; and the Amsterdam Dance Event each October, considered one of the world’s best events focused specifically on electronic music.  The summer also brings huge dance parties to Amsterdam; these include Dance Valley, Awakenings, and Mystery Land.

Students with an interest in 20th century history will want to visit the Anne Frank House, where Anne and her family hid for more than a year from the Nazis occupying the city during World War II.  Tourists can see the actual hidden rooms that protected the family and explore exhibits highlighting the effects of the Holocaust on the Jewish population of Amsterdam.

Amsterdam offers students in need of a break a city that is easy to reach from the UK, with both ferries and planes providing transport.  Once in the largest city in the Netherlands, however, students on holiday might just decide that they never want to leave!