Scotland: The Enchanting North of Britain 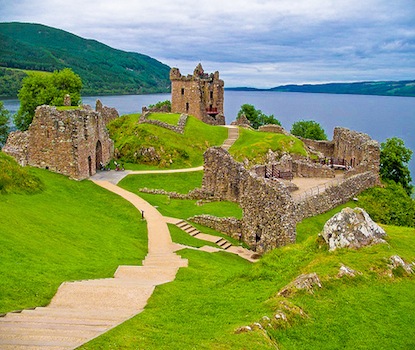 A constituent nation of the United Kingdom, Scotland occupies the northernmost portion of the island of Great Britain.  In addition to sharing a border with England, Scotland is bounded by several bodies of water including the North Sea, the Atlantic Ocean, and the Irish Sea.  Contrary to popular perception, however, Scotland consists of much more than the mainland; the nation also includes nearly 800 separate islands, many of them scattered near Scotland’s 6,000 miles of coastline.

The capital of Edinburgh is also the country’s second biggest city; the very largest of all is Glasgow.  While both cities are located in the south, they are strikingly different.  Glasgow was once one of the most important industrial cities in the world while Edinburgh is more noted for being a centre of activity during the Scottish Enlightenment, a time when Scotland was one of the most literate nations in Europe.  This tradition of literacy was recognized in 2004 when the United Nations began awarding the distinction “City of Literature” to various locales around the world; Edinburgh earned the very first such award.

Scotland’s capital is virtually chock-a-block with museums and galleries that can help tourists trace not only the development of major movements in the arts but also the evolution of the Scottish nation itself.  Not to be missed are the National Galleries, which consist of five separate museums in Edinburgh.  These include the Scottish National Gallery, the National Gallery of Modern Art, and the National Portrait Gallery.  The portrait gallery in particular is an excellent Scottish history venue, possessing several portraits of the country’s most famous figure: Mary, Queen of Scots.

Glasgow: a picture of history

In addition to relics from the Industrial Age, Glasgow is also of interest to history buffs.  The Glasgow Cathedral is the only cathedral located on mainland Scotland to have survived the tumultuous period of the Scottish Reformation without any appreciable damage.  This allows visitors to “look back” in time and see a worship setting that predates 1560 when the Reformation began in earnest.

The Cathedral may also be of interest to Harry Potter fans.  Scotland, of course, is the setting for the fictional wizardry school of Hogwarts.  The wizard hospital in these popular books is named after a real person, however: St Mungo.  As it turns out, the Glasgow Cathedral is built atop the burial place of St Mungo himself, who lived in the 600s.

The natural wilds of Scotland

Perhaps the most famous region in Scotland is the Highlands, named for their mountainous character and high elevations – the highest in all of Britain.  While the Highlands are characterized by fresh air sweeping up steep grassy crags, some tourists visit the region for another reason entirely: to see ancient stones from the Cambrian period, that have been thrust to the surface by geological forces.

A popular attraction here is the Loch Ness region, made world-famous by the supposed existence of a sea monster in the icy depths of the loch.  Loch Ness is the second largest lake in the nation, second only to Loch Lomond in surface area.

Scotland is an ideal holiday destination for UK residents due to its close proximity to England and Wales.  However, its unique natural beauty and rich history and culture also make it highly attractive to visitors worldwide.  Tourists from the United States, Canada, and New Zealand find it one of the most convenient places in Europe to visit since English is understood everywhere even though Scottish Gaelic is also a recognized regional language.