Olé! A gap year in Mexico 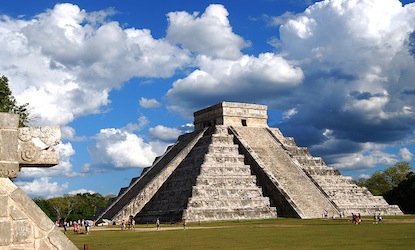 Mexico is the southern-most nation located in North America.  Bordered by the United States to the north and the Central American nations of Guatemala and Belize to the south, Mexico is a constitutional republic comprised of31 individual states.  Those who have never travelled in this nation may have a single image of it, consisting perhaps of a towering Aztec step pyramid, but the truth is that Mexico is a highly diverse place.  The nation contains mountains, deserts, and rain forests as well as bustling urban metropolises and small, isolated villages.  This very diversity means that when it comes to choosing activities for a gap year, Mexico truly does offer something for everyone.

Many of the world’s turtle species are endangered, largely because of human encroachment on their nesting grounds.  One of the intriguing gap year projects in Mexico is turtle conservation, which involves a myriad of tasks including wandering out in the dark of night to search out turtle nests and guard them against poachers.  Volunteers patrol the beach areas where sea turtles come on land to lay their eggs and get to enjoy the rare experience of seeing the turtles lumbering out of the waves by night.

Since the nesting season obviously does not take place all year long, turtle conservation programmes frequently offer gap year students stints that last for three months.  This can be ideal for individuals who want plenty of time to explore the length and breadth of Mexico during the balance of their year away from home.

Another popular gap year activity in Mexico is backpacking through desert or rain forest zones.  Much of the nation is sparsely settled and presents wilderness lovers with a set of climates and conditions that will be new experiences compared to backpacking in the UK or Europe.

Mexico is perhaps most famous for Aztec and Mayan ruins that are both well-preserved, and at times, massive.  Some of the sites are remote and perfect for backpackers, while others are located only a short distance from the capital city of Mexico City.  Teotihuacan, for example, was once a thriving metropolis of more than 100,000 people.  The streets, pyramids, and temples used more than a millennium ago are still standing today and can be explored in detail – the major pyramids can even be climbed.  Yet the entire complex is only 30 miles from the capital.

Mexico has three enormous coastlines: one on the Pacific, one lining the Gulf of Mexico and the Caribbean, and a lesser known coastline along the eastern edge of Baja California, a peninsula hundreds of miles long.  This last coastline faces the Gulf of California, also known by its traditional name of the Sea of Cortez.  The presence of such extensive beaches in the nation means that much of the country has a thriving beach culture.  In these areas, fresh seafood, often grilled with lime and chillies, is a staple on restaurant menus and gap year students on a break can enjoy activities such as deep-sea fishing and scuba diving in warm, tropical waters.

Mexico is an ideal destination for a gap year both for those interested in environmental outreach and those who simply want to experience a new way of life in an exciting, New World location.

This country does have a severe problem with drugs and there is often extreme violence between the gangs.  It is therefore advisable to take advice from HM Foreign Office to avoid any areas that might present a threat.