Music Festivals Around the World 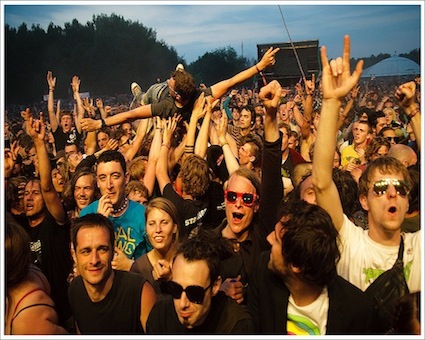 One thing that draws tourists to locales both foreign and domestic is the chance to be exhilarated by the energy and excitement of a music festival. Travellers certainly have no shortage of such festivals to choose from. Located in places as diverse as Japan, the UK, and the USA, today’s most popular music festivals draw visitors from all around the world.

Taking place in the California Desert, the Coachella festival is held each year in late spring; a wise decision since summer temperatures here can be far too hot for comfort. Camping is available, though campers should be aware that night temperatures could be quite cold even in late spring. Unlike some festivals, this event features several different stages and tents, with live music continuously playing in each one. Rock, hip-hop, and electronic music are among the genres represented each year.

Held each year on the weekend of the August bank holiday, these two English festivals allow visitors to camp out for the duration, although day tickets are also available. The Reading Festival takes place at Little John’s Farm near Caversham Bridge, while the Leeds festival uses Branham Park near Wetherby as its primary venue. The Reading Festival is one of the oldest ‘popular music’ events to be still taking place. Visitors to both events can expect to enjoy a variety of music genres, including rock-n-roll, alternative music, and independent music, though punk and metal acts are also included.

The World of Music, Arts, and Dance is a series of festivals that travels the world, taking place in nations such as the UK, Australia, Italy, and New Zealand. In the UK, W.O.M.A.D is held in the grounds of a stately home in Wiltshire. Since 1982, over a million music lovers have attended one or more W.O.M.A.D festivals.

This annual festival in Benicassim in Spain attracts as many as 50,000 visitors who come to enjoy pop, rock, and electronic music along with short films, fashion shows and the excellent nearby beaches.

Although the Glastonbury Festival is not running this year (due to the London Olympics), music lovers can attend the Isle of Wight Festival, which takes place each year near the town of Newport. Revived in 2002, the festival has over the years hosted such luminaries of the music scene as Paul McCartney, Donovan, Robert Plant, David Bowie, the Police, and R.E.M. Solo Music Agency promotes the event, which is scheduled to take place in June 2012.

This three-day event is held at the Naeba Ski Resort, located in Japan’s Niigata Prefecture. More than 200 artists, both from Japan and other nations, will perform, which makes the Fuji Rock Festival the largest outdoor music festival in Japan. More than 100,000 visitors typically attend.

Held each year near New Year’s Eve, this Australian music festival lasts for four days and takes place in both Victoria and Tasmania, with the two venues sharing acts so that tourists can get the best of both worlds.