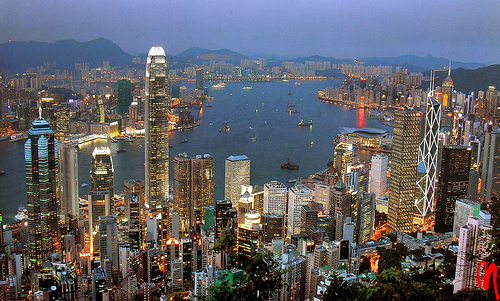 Hong Kong has a real buzz!  It is busy and vibrant and is a fascinating place to visit. The city is noisy and can be hot with a very high humidity level, so be prepared.  Do not let such trifles put you off though, a visit to Hong Kong is definitely worth the long flight and will provide you with a unique holiday experience.

The region spent more than a century as a British colony, but since 1997 it has been part of the People’s Republic of China and is now known as a Special Administrative Region. This change did not bring about the negative effects that many people feared and Hong Kong is as exciting as ever it was. This interesting history has given Hong Kong a true “East meets West” flavour, which combines the traditional culture of China with one of the most impressive skylines in the world.

Although Hong Kong occupies a relatively small area, more than seven million people make their home here. An excellent public transport system keeps road traffic levels down and enables tourists to get around the city quickly, without having to worry about navigating a car around the busy streets.

The skyline by night

Some cities are known for their nightlife, but Hong Kong is equally famous for its night-lights. The hundreds of skyscrapers that ring the South China Sea coastline are brilliantly lit up at night, with a glittering array of neon colours that together comprise the ‘Symphony of Lights’, a nightly show put on for the benefit of locals and tourists.

The best way to enjoy this impressive display is to take an evening cruise around Victoria Harbour on the Star Ferry or one of the other services that cater to tourists. Many visitors find that a relaxing way to finish a day in Hong Kong is to enjoy a dinner cruise, as they marvel at the night skyline.

Lantau Island is the largest of the islands that make up the city. One of the iconic images associated with Hong Kong, the “Giant Buddha,” is located here. Fashioned from bronze, this seated figure was once the largest seated Buddha statue in the world. Others attractions on the island include the Tai O fishing village, which is built on stilts and the Po Lin Monastery, where visitors can sample Chinese vegetarian cuisine.

Many visitors enjoy the “Ngong Ping 360,” a tourist experience that takes them by cable car to the plateau on the island. Along the way, they are able to visit a traditional Chinese village.

The ultimate “East Meets West” attraction in Hong Kong is also located on Lantau Island. This is Hong Kong Disneyland, which opened its doors in 2005. The amusement park features new lands that cannot be seen in Disneyland California, such as Toy Story Land, which is themed to use stalks of bamboo to simulate gigantic blades of grass.

The Hong Kong Geopark of China

Tourists more interested in nature than history or entertainment will want to visit this nature preserve situated in territories to the east and north-east of the city proper. Here, hikers can explore the Sai Kung Volcanic Rock Region, along with the New Territories Sedimentary Rock Region, where they learn about the natural history of this area of China.

Of particular interest to many visitors are the strange landforms carved out by the action of wind and water over the course of millennia. In all, the geopark features eight different scenic areas.

Hong Kong is a place where tourists can delve deep into the past, soak in the traditional culture of coastal China and enjoy the best that modern entertainment has to offer.