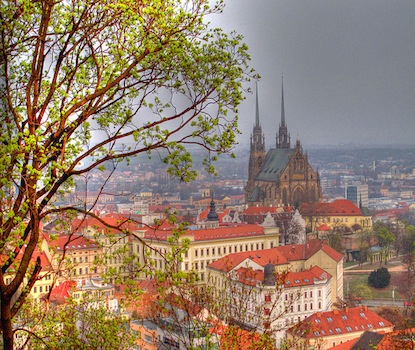 Whilst city breaks have become increasingly popular in recent years, especially in London, Paris, Rome and Madrid, more and more young couples are heading for the bright lights of some of the less well-known destinations listed on expedia.co.uk. There are some unusual and surprising possibilities for those individuals in search of cultural interest, great sightseeing opportunities and fantastic nightlife.

The Czech Republic’s second largest city, Brno, has a growing reputation as a very good holiday destination, especially amongst younger couples. A significant administrative centre for the South Moravian Region of the Czech Republic, and more than a thousand years old, Brno is rich in cultural features, such as Spilberk Castle, top class museums and fabulous architecture from the Renaissance and Baroque periods, plus the superb Gothic Cathedral of St. Peter and Paul on the stone headland, Petrov.

Brno, being a university town, English is widely spoken, and the hotels, shops and restaurants are as good as Europe’s best. It is at the centre of wine country and Brno’s hospitality is legendary.  Its folk festivals attract a lot of visitors, as do its key sporting events, which include motor racing, horse racing, basketball and rugby. Nightlife includes theatre shows and jazz cafés, as well as an impressive range of clubs and bars, often themed, to satisfy all tastes.

The national parliament of Liechtenstein is based at Vaduz, the capital of the principality. Here, Vaduz Castle dominates the landscape from the vantage point of a hilltop, and can be seen from any point. The City Hall, Government House and the Cathedral of St. Florin represent a variety of architectural styles. Cultural offerings include the National Art Gallery – a contemporary landmark building housing both traditional and contemporary collections – and the National Museum. Football is popular here and FC Vaduz play in the Swiss Football League.

Vaduz has good restaurants with a variety of cuisines, which can be enjoyed with Liechtensteiner wines. Clubs, bars and restaurants are centred on the Städtle pedestrian area and the Z nightclub is one of the most popular, staying open well into the early hours of the morning. The Old Castle Inn is a more typically English pub and better suited to a quiet drink.

Bilbao is the tenth largest Spanish city and is unique because of its position as the capital of Biscay province in the Basque Country. Nestled between two mountain ranges, Bilbao has experienced a cultural revolution since the creation of the architecturally striking Guggenheim Museum Bilbao in 1997. Architectural styles in the Old Town range from gothic to contemporary, and there are interesting churches, cathedrals and bridges dotted throughout the city.

Nightlife in Bilbao is vibrant and varied – from theatres and concert halls, to music clubs and bars. Somera Street in the Old Town is the hub of young Basque culture, where the under 35s meet for a drink. Séptimo Cielo is at the forefront of music and partying, with great drinks service and is very popular with local people. There’s a music trail along Calle Simon Bolivar that includes the Cotton Club, Pinkertons and Indie.