Finding roadkill on your travels 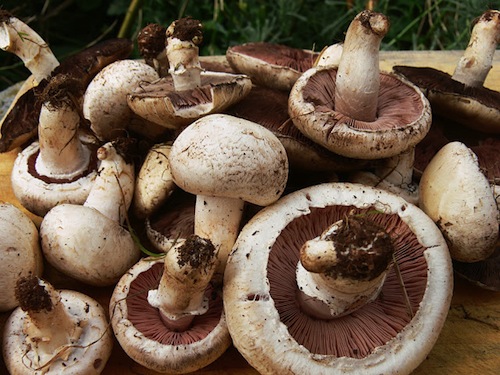 It’s been a long, cold winter. The temperature has finally started creeping up towards the average for this time of year, and the medium-term weather forecasts are finally looking positive.  Foraging for wild mushrooms has also been delayed.  A lot of plant growth is two or three weeks behind where one might expect it to be at this time of year, and there’s certainly no sign of any of the spring fungi fruiting.  The only thing I’m finding a lot of at the moment are dead pheasants!

Pheasants are my staple roadkill.  Deer provide far more meat, and far more of a challenge to get home and deal with, but I’m lucky to find two in a year (in an edible state).  I see plenty of dead rabbits, but most are too small and too damaged to bother with.  Pheasant causalities are both numerous and generally provide at least some usable meat, as well as being very easy to spot.

These two carcasses both had damage to the legs, and in one case only one of the breasts was usable.  Still, that’s three pheasant breasts for no cost and minimal effort.  Not bad when there is so little else to be had, spring being late and all that.

People often ask me about the hanging of game when I talk about eating roadkill pheasants.  Some of them seem to think it isn’t safe to eat pheasants unless they’ve been left for a couple of weeks to start rotting.  You certainly wouldn’t want to do that with roadkill.  People hang pheasants because pheasant meat tends to be quite tough, and leaving it to start rotting makes it more tender.  Some people also prefer the taste of the slightly-rotten meat.   With roadkill the policy must be to cook as quickly as possible, for reasons which ought to be obvious.

As for deciding what is edible, and what isn’t…trust your common sense, and your nose.  How long has it been there?  Bear in mind that this partly depends on the weather.  In high summer, no carcass lies around for long before scavengers find it and the forces of decay set in.  In the depths of winter, the cold can preserve it.  Still…if it is still warm then you know it hasn’t been there for long (although don’t mix up residual internal warmth with being roasted by the full sun on hot tarmac.)  Also, if it has rigor mortis then it hasn’t been there for much longer.  After that use your nose – it’s what evolution made it for.  If the meat smells bad, then don’t eat it.  If it smells fine, and there is no physical damage from the collision, then it is likely to be OK to eat.  At least, I can say that these are the criteria I have used for several years, and I’m yet to be unwell after eating roadkill pheasant.

What to do with it?  Because it is likely to be quite tough, and can’t be hung, the solution is to casserole or stew it.  Cook it for 2, 3 or 4 hours.  I’m not going to provide a recipe – plenty of these can be found on the internet.  Most of the best ones involve white wine, smoked bacon, garlic, onions, mushrooms, rosemary and thyme.  Goes well with mashed potatoes and, at this time of year, foraged stems of alexanders.  I went for a simpler version today, and even had to resort to shop-bought mushrooms.

By the time this article goes live, spring should have arrived and the St George’s Mushrooms will be the proof.  I’m just hoping that I’m finally going to get lucky with those morels…