Exciting waterfalls of the world 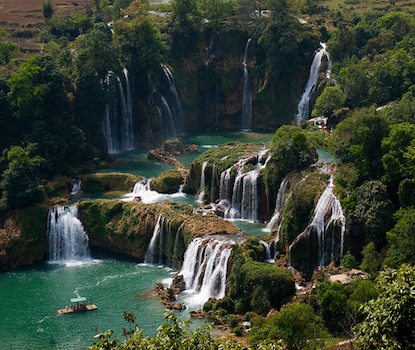 A tour of the world’s greatest waterfalls is both a way to get close to nature and to visit a great variety of fascinating nations on nearly every continent on the planet.

Iceland is famous for its volcanoes, but nature lovers will be particularly impressed with the size and strength of Detifloss, a waterfall on the Jökulsá á Fjöllum River.  At 100 metres wide and almost half that distance tall, Detifloss is Europe’s most powerful waterfall – and also its most unique, since the water cresting off the cliff has a distinct milky colour.  The hue is a result of the rich sediments flowing into the river from the Vatnajokull glacier.

Curved in an arc more than 600 feet wide, Detian is south-east Asia’s largest waterfall and is located on the border between Vietnam and China. Unlike some falls, Detian is not a sheer drop; instead, water tumbles down three tiers of rocks as it falls more than 200 feet. The result is a frothy confection set amid the beauty of a tropical jungle.

One of the world’s tallest falls; Yosemite Falls in northern California is nearly 2500 feet tall, with water falling in two main tiers referred to as the upper and lower falls. Yosemite Falls is highly unusual for more than its outstanding beauty as the short trail to the lower falls is paved.  It is so gently sloped that it is actually accessible to the disabled, including those using wheelchairs.

Widely popular with honeymoon couples from both Canada and the United States, Niagara Falls is the largest waterfall in the world in terms of the volume of water passing over them.  The falls have easy access from a number of different angles. One of the best is a view from the bottom up, available by taking a river cruise up to the base of the falls on the famous Maid of the Mist; guaranteed to drench anyone standing on the ship

Ranked as the tallest all-season waterfall on earth, Venezuela’s Angel Falls plunges down from a tabletop mountain, but oddly enough, has no true river system feeding it. Instead, the fall’s source is simply the abundant condensation from the cloud forest itself.

The world’s largest single waterfall, Victoria Falls is more than 1,500 metres wide and over 100 metres tall. That works out to more than a million litres of water per second plunging to the bottom. One of the few waterfalls to be classed as a UNESCO World Heritage Site, Victoria Falls is also considered one of the seven natural wonders of the world.

This falls in the remote Outback is somewhat difficult to reach; tourists need to fly in and hike the rest of the way or drive a four-wheeled drive vehicle to get close. Once Mitchell Falls comes into view, however, the journey will probably be forgotten: the tumbling water stands out in brilliant contrast to the deep red colour of the cliffs all around.

Seeing the world’s most impressive waterfalls close up truly is a great experience for any keen traveller.