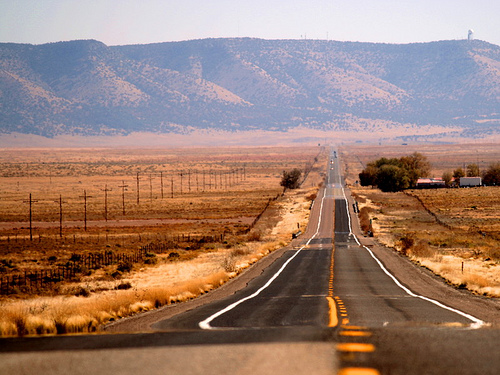 One of the pleasures of visiting a large nation such as the United States is the opportunity to travel across and explore this landmass with all its diversity of landscape and culture.  Taking a road trip is a great way of learning more about the wide variety of people and places that all call themselves “American.”  If you are planning such a trip – lucky you – it is a good idea to read up on the subject before you start sorting out the logistics.  We suggest that you start with Bill Bryson’s The Lost Continent published in 1989. Bryson describes his experiences on a road trip through 38 US states – a very entertaining and informative read.

If you are contemplating such a trip here is a starting point to consider. Why not take a flight to New York, rent a car and drive all the way to the Pacific Coast? You will see some amazing things and meet some fascinating people along the way.  It is a cliché, but this really will be a holiday that you will never forget.

Widely considered as the most iconic American city of all, New York’s classic American tourist sights of the Statue of Liberty – a gift from France more than a hundred years ago; Central Park, in the heart of Manhattan; the Metropolitan Museum of Art and the Empire State Building, which featured heavily in the original film version of King Kong.  Broadway, that famous street of theatres at the heart of the city, is the best spot in the entire US to see some great stage shows.

A drive west across New York State to the border of Canada takes tourists to one of the most outstanding natural wonders in North America: the huge collection of waterfalls known collectively as Niagara Falls.  The best way to see these majestic waterfalls is by boarding the Maid of the Mist tour, so named because this ship ferrying passengers to the base of the waterfalls gets so close that the tourists are soaked.

Although it is possible to cross the nation by driving only about 3,000 miles, this is not necessarily the best route for those who want a wider experience of America.  No trip across the country would be complete without delving deep into the region known simply as the South.  A good first place to stop in this region is Nashville, known as the “country music capital of the world.”

Not to be missed is the Country Music Hall of Fame and the Grand Ole Opry House, which still offers live country music several times each week, just as it has done for decades. Nashville is also a good place for tourists to start to get acquainted with the Southern lifestyle, which includes such culinary delights as fried chicken steak served with country gravy and a cooked breakfast grain known simply as grits.

Anyone interested in music or entertainment will want to stop in Memphis, Tennessee to tour Graceland, the home of Elvis Presley. It has been lovingly restored to the way it was when Presley lived there with his wife Priscilla and daughter Lisa Marie.

Situated in a great desert that also occupies much of Texas and Oklahoma, Roswell is the site of an alleged UFO sighting in 1947.  The government denied that any extra-terrestrials had visited this small town, but questions about what was actually seen here still persist.  Visitors who want to investigate for themselves should start at the Roswell UFO Museum.

This vast man-made lake in the Utah and Arizona desert is a wide splash of blue against a brilliant orange and tan landscape.  Interestingly, it has probably been seen by more people than most other lakes in the nation since the opening sequence of the original Planet of the Apes movie was filmed there.

Located entirely in Arizona, the Grand Canyon is an enormous gouge in the earth cut by the Colorado River over the course of almost two billion years.  Classed as one of the Seven Natural Wonders of the World, the canyon is about 18 miles wide at one point and stretches for almost 300 miles.  Viewpoints along the north and south rim provide unforgettable panoramas; tourists can also take helicopter tours over the canyon or ride a donkey down trails to reach the very bottom.

Gambling wealth has caused this huge city to spring up in the desert, providing tourists with a kind of fantasy land where hotels are constructed to resemble glass pyramids, medieval castles, Roman palaces, and even cities such as Paris and New York.

One of the earliest of America’s national parks, Yosemite has high waterfalls and imposing mountains, plus a huge diversity of flora and fauna. An unusual sight is Half Dome, an enormous dome of granite that was long ago vertically sliced in half by the action of glaciers.  Summer tourists may see rock climbers ascending the sheer face of this eye-popping natural wonder.

Tourists who reach the West Coast at this city can treat themselves to a walk across Golden Gate Bridge, which offers stunning views out over the Pacific.  Other sights to see in San Francisco include the U.S.S.Pampanito, a World War II submarine moored near the iconic Fisherman’s Wharf area. 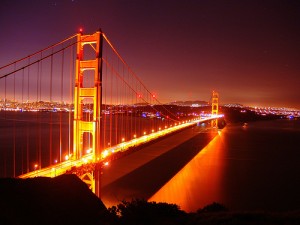 Although the route above will take tourists all the way across the nation, with the US being so vast many such “great American road trips” are possible.